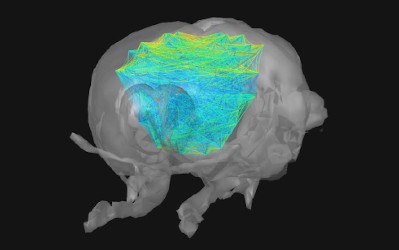 
Our team has expanded the abilities of functional ultrasound (fUS) to whole-brain 4D imaging: for the first time, brain activity in rodents has been recorded in the entire brain (3 spatial dimensions) at high frame rates (1 temporal dimension) using matrix arrays. It has been applied to monitor transient activation events as well as mapping the functional networks linking distant brain regions. This achievement was obtained using high-channel count ultrasound probes with advanced ultrasound emission sequences. This work has just been published in Nature Methods.

Since its introduction in 2011, functional ultrasound (fUS) imaging has demonstrated its invaluable potential to study the brain activity using a non-invasive and portable technology. Until today, most fUS experiments were performed in two-dimensional imaging planes. Expansion to volumetric (3D) imaging is of major interest in neuroscience to investigate the brain dynamics as a whole. 3D ultrafast imaging is being developed in our laboratory for many years, with the construction in 2014 of the very first 3D ultrafast ultrasound scanner for cardiovascular applications, operating at >5000 volumes/sec. This high-channel count scanner drives matrix arrays (composed of a thousand ultrasound emitters/receivers) to probe an entire volume in a single acquisition.

For neuroimaging applications, an additional technical challenge arises from the intrinsically lower sensitivity of matrix arrays compared with arrays used in 2D imaging. In the study published in Nature Methods, our researchers have addressed this issue through advanced ultrasound sequences based on coded emissions.

The abilities of 4D fUS imaging were demonstrated in three applications:

The simultaneous acquisition of fUS data across a large volume enables to study the existence of functional networks over large distances, and to capture transient events across the whole-brain. Our ambition is to develop 4D fUS imaging in clinics, as it could have a huge impact particularly for the management of neurodevelopmental disorders in premature newborns.

This work was supported by the European Research Council (ERC Advanced Grant agreement no. 339244-FUSIMAGINE), a funding from the Human Brain Project (project no. FUSIMICE ANR-15-HBPR-0004), as well as the AXA Research Fund.